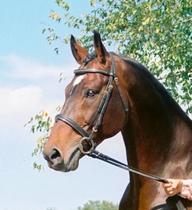 Edelweiss de Bonce began his Dressage training at his breeder's farm in France, where he soon became a finalist at 5 and 6 in Dressage at Fontainebleau. Continuing his career, he was moved to Germany where he was trained through Grand Prix Dressage with Catherine Haddad. Upon being sold to the USA to Cory Walkey, Edelweiss continued his Dressage career being successfully competed under Mette Rosencrantz at PSG and Intermediare I.

After a long, successful competition career, he is now retired to the breeding shed. Through his many years under saddle and competing at the top of his sport, he's earned the respect and kind words from the people who's lives he's been a part of. With an eager attitude and a willingness for the job, he's proven himself to be a superb athlete and a consummate gentleman. 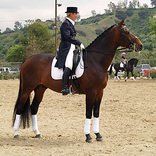 True to our standard in quality, Edelweiss comes from a long, well proven line of magnificent and talented athetes.   He is by the 1974 Selle Francais stallion "I Love You" (By Alme Z), who was winner of the World Cup in Vienna, and named AHSA Showjumper of the year in 1983. His dam, the French Anglo Arabian mare "Jib'Or" (who's lines trace to Arlequin, sire to Zeus), is also dam to Cool Fontaine, the 1990 Approved Anglo Arab Stallion.  Although Edelweiss proved himself in the Dressage arena, his pedigree screams jumping and contains some of the most renowned jumper breeding in the world! 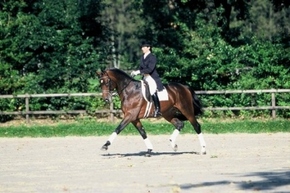 Edelweiss is part of a family of truly outstanding equines. Not only does he have an amazing show record to back up his quality, but with bloodlines relating to some of the horse industries most impressive performers he's a package deal. With a classy modern look, an incredible temperament, and a pedigree full of champions, he has something to offer every mare owner.

Edelweiss is fully licensed and approved with the Selle Francais Registry, Oldenburg N.A., German Oldenburg Verband and the International Sporthorse Registry.  For more information on Edelweiss, please contact us at office@avalon-equine.com.

Please join Edelweiss de Bonce on his Facebook page by following the link below!