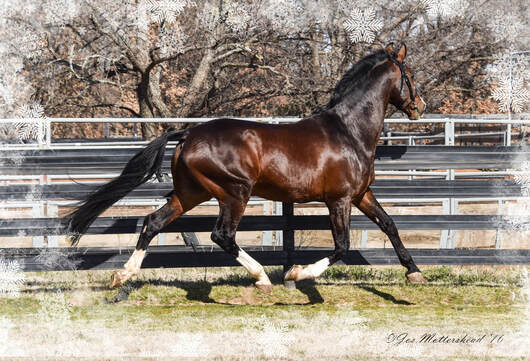 ​Toronto, an Elite Stallion with the Hanoverian Verband, is a Dutch stallion acquired by the Celle State Stud to further the jumping talent of the breeding program. His performance test single score in jumping was 9.3. This powerful bay stallion descends from the jumping horse producer “Now or Never M,” who is stationed in Holland. Toronto's grandsire is the prepotent Voltaire, a consistent sire of international jumpers with temperaments of gold. The damline is also very interesting - Toronto's damsire is Belisar by Saros xx, who is a full brother to Swazi xx, the sire of the Trakehner stallion Consul.

The scope and athleticism of Toronto can certainly be attributed to his sire, the Voltaire son Now or Never M. Voltaire looks back on a long lasting career in international show jumping ridden by Jos Lansink. He was among the top jumping horses at shows in Calgary, Stockholm, Lanaken, Helsinki, Wiesbaden and at Olympia in London. Voltaire obviously passed on his characteristic ability to perform to his offspring both in dressage and jumping. He is descended from the legendary Furioso II who like none before him influenced Germany's horse populations by producing offspring with enormous versatility and various purposes.

Now or Never M has many approved sons to his credit and is well on his way to establishing his own line in Hanoverian breeding. Now or Never M was champion in 's-Hertogenbosch in 1998. He was a stallion of great presence. He won the finals in the IAN trophy in the KWPN competition in the year 2000. In 2001, Now or Never M gained 7th place. He was one of the 12 selected KWPN horses for the World Championships at Lanaken in 2001 and he won first place in the Stallion Competition 2000/2001 in Giesbeek. Now or Never M has proven himself as a sire by producing a multitude of uniform foals with very good riding type, good quality and outstanding presence. They are known for having wonderful movement, good minds and exceptional jumping ability.  Now or Never M currently has a very high breeding value of 152 points for jumping on the German FN’s ranking system and has shown to consistently improve the canter.

Toronto's dam is by Belisar, a Saros xx son.  Saros comes from a strong line of successful steeplechasers, race winners, and sport horses. The infusion of Thoroughbred blood is essential in warmblood breeding and this particular line has had an excellent influence which can also be seen through the Trakehner stallion Consul.

The Now or Never M nick with Beilsar/Saros xx daughters has proven to be an undeniably successful cross producing the approved stallions Valentino, Winston Uccello, Alchimist and Vallado, in addition to Toronto.

Toronto gained the following scores at his performance test; character 8, temperament 8, willingness to perform 8, conformation 8, trot 6.33, canter 8 walk 7.67, natural jumping ability 9, free jumping 8,83, jumping manner 9, jumping technique 8.67, cross country 10. He won the jumping phase of the test which could be expected because of his outstanding pedigree. Among his offspring produced to date, he has one licensed son, 5 state premium mares, 15 auction horses.