Barbara Ann combines some of the very best in sporthorse breeding.  Her sire, Bonheur was is the first approved son of the great Brentano II, to stand in North America.  Brentano II was himself a successful Federal Championship Competitor and was trained to advanced level.  He is highly esteemed as a hreditary transmitter of rideability.  Bonheur completed his stallion licensing test at Adelheisdorf in 1996, achieving top scores in rideability.  He received 9's for his walk and 8's on his trot and canter.  He also received 8's for his character and temperament.  Bonheur won the Championship Stallion show in Griesbeek, Holland in 1997 against some top competition, most of whom were 5 and 6 year olds.  Bonheur qualified for the Bundeschampionat in 1998 as a five year old.  As a six year old, he won the prestigious Nobilis Cup in Bremen, Germany.  His offspring have been shown to be very elegant with tremendous rideability.  Bonheur's offspring have shown high performance ability in dressage bringing Bonheur's  "Breeding Value" in dressage to the top 10% in Germany with an overall 150 points. 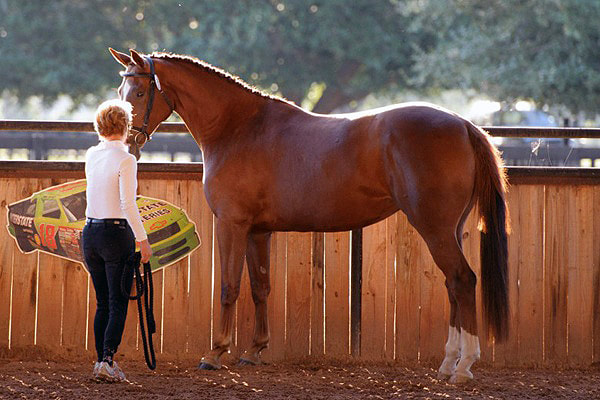